Update: The TSB has completed this investigation. The report was published on 18 February 2019.

Collision with terrain at night

On 01 February 2018 , at about 1945 Eastern Standard Time, the privately operated Robinson R44 Raven I helicopter (registration C-GYMG, serial number 2081) departed Saint-Georges de Beauce, Quebec, with the pilot and 2 passengers on board, on a night visual flight rules flight to Saint-Alexis-de-Montcalm, Quebec. At 2032, the Canadian Mission Control Centre received a distress signal from the helicopter’s emergency locator transmitter. At about 2135, the helicopter was found in a field in Saint-Joachim-de-Courval, Quebec, near Drummondville, Quebec. The helicopter was destroyed by impact forces and a post-impact fire. All of the occupants were fatally injured.

TSB deploys a team of investigators following a helicopter accident near Drummondville, Quebec

The Transportation Safety Board is deploying a team of investigators following a helicopter accident near Drummondville, Quebec. The TSB will gather information and assess the occurrence. 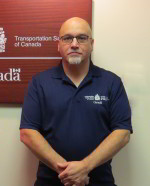 Mr. Jimmy Cancino has over 25 years of civil aviation experience. He joined the TSB in 2013 and is now a Regional Senior Investigator based out of Dorval, Quebec.

Before joining the TSB, Mr. Cancino worked during 11 years for Transport Canada both as a civil aviation safety inspector and as an enforcement investigator after a career in the private sector as an aircraft maintenance engineer and inspector for various approved maintenance organizations, aircraft manufacturers and airlines.